Verona is one of Italy's loveliest towns, famous for its summer opera season. This has been a thriving and successful town for most of its history, and today smart shops and cafes fill the attractive medieval lanes of the historic centre. There's a lot to see here, from Roman ruins to the so-called 'Juliet's balcony', and the town is also well-connected for exploring the surrounding area, including destinations like Lake Garda.

Verona was an important Roman town and is rich in archaeological sites. The Roman Arena, where concerts and operas are now performed in the summer, is the city's grandest sight, but you can spend a long time simply exploring the narrow streets lined with palazzi that make up the historic centre. The town's museums and churches contain fine works of art, while the ruined Teatro Romano over the river has excellent views from the terraces where the ancients watched plays.

On arrival in Verona , you will be met by our ground team and escorted to the executive style coaches. The airport is approximately 35 minutes the hotel on Lake Garda 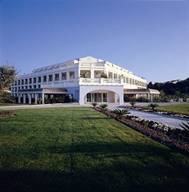 Located close to the shore of Lake Garda , the 4 star Palace Hotel features 85 well appointed guest rooms, a modern wellness centre and 2 swimming pools, one with panoramic views across the lake.

Guestrooms at the Hotel Palace are modern, air conditioned and spacious. They feature satellite TV, a mini-bar and a terrace or balcony, some with stunning lake views and some with garden views.

An American buffet breakfast is available and the bar serves drinks, snacks and light meals.

The very well appointed Palace Spa includes a Turkish bath and Finnish sauna and offers a variety of beauty treatments and massages.

10.00 Meet the English speaking tour leaders at the hotel and departure by coach to the Valpolicella region

11.00 Visit of one of the most ancient and world renowned cellars in the area

14.15 Departure to Verona downtown meeting with English speaking guides and classical guided tour of the city centre, including entrances to two monuments.

16.30 End of the visit and free time for shopping (tour leaders at disposal)

18.00 Departure. Transfers to the hotel by coach

20.15 Departure by coach and tour leaders to the restaurant for dinner (ca. 2 km )

20.30 Dinner at a top class restaurant facing the lake

08.30 Transfer by coach to Sirmione (luggage on the coaches)

09.15 Departure by private motorboats for the visit of the Isola del Garda

10.00 Guided visit in English of the Isola del Garda in 2 or 3 small groups with snacks and tasting of local products (3 wines, 3 cheese types, salami, pizzette, dry snacks, olives and a taste of the oil produced by the family owner of the island)

12.30 Lunch in town: informal traditional restaurant that serves also pizza, located in the main square of Sirmione , close to the harbour and very comfortable for the afternoon walk

14.00 Time at leisure for a stroll in the characteristic centre and shopping

16.00 Departure by coach to the airport

17.00 Arrival at the airport and end of the tour 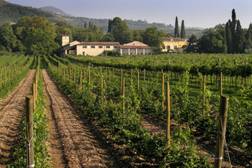 Dante Alighieri spent several years of his exile in Verona . His son, Pietro, came to love the beauty of the city and its countryside, and so decided to remain in the area, purchasing the Casal dei Ronchi in Gargagnago in the heart of the historic Valpolicella region in 1353.

Twenty generations later, both house and estate still belong to Dante's direct descendants. Today, the Villa stands surrounded by Valpolicella vineyards. The nearby Foresteria provides accommodation for guests and dedicated rooms for luncheons and tastings. It is one of the most famous (if not the most famous) Valpolicella cellar in the world.

During the visit guests will find out about the origins of the family, the techniques of classical Valpolicella wine production through a walk across the villa's park, the drying chambers and the ageing cellar.

A 3 course lunch combined with 3 wine tastings will be served in the Foresteria. 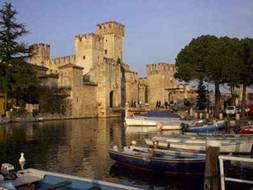 The Latin poet Catullus loved and sang of Sirmione as "the gem of all the peninsulas". Not only Catullus, but also Caesaris is said to have stayed here. In the 8th Century, the Longobards built a convent; Dante came looking for inspiration, Carducci and Boito spent meaningful hours here.....

The Romans built two castles, two harbours, a settlement and the gigantic villa. On the foundations of the old eastern harbour, the Scaligers later built their famous fortress. Numerous villas and churches, such as Santa Maria Maggiore's and San Pietro in Mavino's, wonderful frescoes, unique portals, belfries, battlements and arches are all to be found in abundance in Sirmione.

Sirmione, however, offers much more: spa and resort, spiritual and cultural centre, gastronomy, wine, markets and fashion shops and the International Academy for Literature. 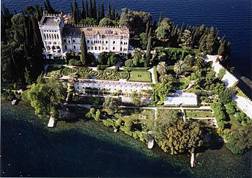 Isola del Garda is a place of rare beauty, bursting with history, memories and legends. There is no doubt the Island was inhabited in early roman times, it was used as a monastery, owned by Napoleon. It then fell into the hands of the state and then passed through several owners. The present owner is the Borghese Cavazza family and from May to September the family opens its treasures for guided tours.

The tour lasts approximately 2 hours through untouched nature in English and Italian gardens and a few rooms of the impressive early 20th century neo-Gothic-Venetian Villa. The visit includes the sampling of local products such as wines, cheeses, salamis, pizzette, dry snacks, olives and a taste of the oils produced by the family of the island.

There will be a coach transfer from the Palace Hotel to Verona Airport.

08:45 Please meet outside the hotel, weather permitting. Your luggage will be taken for you to the coaches.

Make an Enquiry
Click here for the latest hot destinations

What do our customers say...?
Click here to see letters