Known as the city that never sleeps, New York is bursting with energy from morning till night. Offering everything from great monuments and museums to chic hotels, shops and lively restaurants, New York is a very popular city-break destination - particularly during the Christmas present buying season. 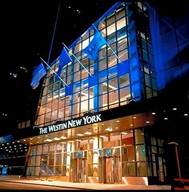 Despite New York's reputation as the city that never sleeps, all 863 guest rooms and suites in the new award-winning Westin New York at Times Square offer an unforgettable accommodation experience.

After a five-year restoration, Grand Central Terminal is quickly establishing itself as the most exciting destination in Manhattan.

A part of this revival is the Metrazur Restaurant, an elegant restaurant located on the East Balcony overlooking the Main Concourse.

The design is sleek, wisely allowing the Beaux Arts-style building, with its starry ceiling and ornate chandeliers, to take centre stage.

This evening guests will have exclusive use of the restaurant and balconies which overlook the busiest hub in the entire city - the Historic Grand Central Terminal.

The Firebird Restaurant is located in a fashionable townhouse on quaint Restaurant Row, just off of Times Square in the Theatre District. The décor is from turn-of-the-century Russia . The owner's wife was a Russian Baroness and her grandfather was the mayor of St. Petersburg prior to the revolution.

The restaurant is filled with family collectibles and antiques reflecting the owner's passion for Russian art, literature and cuisine.

The centrepiece of the restaurant is the fabulous dancing shrimp, sushi and original smoked fish bar. Floor-to-ceiling columns are painted with New York scenes by New York and California artists together with a giant mural depicting Hollywood greats.

Remi's is fast becoming a New York classic. In this upbeat, stylish restaurant, guests dine on superb Venetian cuisine under a stunning mural of the Grand Canal and high ceilings.

The service is attentive and the exquisite dishes make this an outstanding dining experience.

Gallaghers is an old-time steakhouse serving full-flavored cuts in three wood-lined dining rooms which seem to sprawl for what seems like half a block.

There are black and white photos of former sports legends, chandeliers made with thick logs and a wonderful old mahogany bar populated by an assortment patrons - this is "Cheers!"

This morning, forget the vouchers or room service and head for fashionable department store "Bloomies!". Up on the 6th floor, at Le Train Bleu (The Blue Train), you will be served a full New York breakfast prior to the opening of the store. The restaurant is a superb replica train carriage with an Orient Express style décor.

Top of the Rock (Rockefeller Plaza)

Top of the Rock is an experience in history and scenery that culminates with the best views of New York City from the newly renovated, 3-tiered observation deck on the 67th , 69th and 70th floors of 30 Rockefeller Plaza. A New York City landmark for nearly 75 years, Rockefeller Centre is located in the heart of Manhattan and is a superb visit to orientate any new visitor.

This morning, forget the vouchers or room service and head for fashionable department store "Bloomies!". Up on the 6th floor, at Le Train Bleu (The Blue Train), you will be served a full New York breakfast prior to the opening of the store. The restaurant is a superb replica train carriage with an Orient Express style décor.

Mr. Gorman, retired NYPD officer, worked in the 23rd precinct in East Harlem, was part of the Tactical Patrol Force, the city wide Riot and Crowd control unit and also worked as a dignitary escort. He has also won meritorious citations and commendation awards.

A three hour will take in some great sights such as #1 Police Plaza, the Brooklyn Bridge (jumpers and water rescues); the Bomb Squad; Mounted Police Headquarters; Manhattan South Headquarters, Task Force and Narcotics; The Police Academy and the City Morgue.

Once famous for its jazz, Harlem is now the heart of New York Gospel! In the 1920's, Harlem became famous for its jazz clubs, one of the most famous of which was the Apollo Theatre where many famous black artists first performed. Today, most of these clubs have now become churches and echo with the sound of gospel. We will experience the soul stirring atmosphere created by the preachers, congregation and choir at one of these enlightening gospel services!

The glamorous Rainbow Room is to be found 65 floors up in the Rockefeller Centre and offers unsurpassed panoramic views of the city. The stylish elegance of the Rainbow Room will provide the perfect backdrop to dine and dance in New York ! 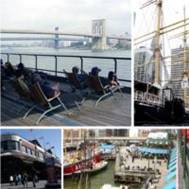 There will be a hot departure lunch at 13:00 prior to leaving for the New York airports for the flight back to the UK . The South Street Seaport is a “not-to-be-missed” experience; this renovated American landmark is right on Lower Manhattan 's historic waterfront.

The Seaport is a thriving community complete with a world-class maritime museum, breathtaking views and more than 100 shops, cafes and restaurants.

Make an Enquiry
Click here for the latest hot destinations

What do our customers say...?
Click here to see letters